Gpsc Syllabus And Exam Pattern For Prelims And Mains 2020


Gpsc Syllabus And Exam Pattern For Prelims And Mains 2020. 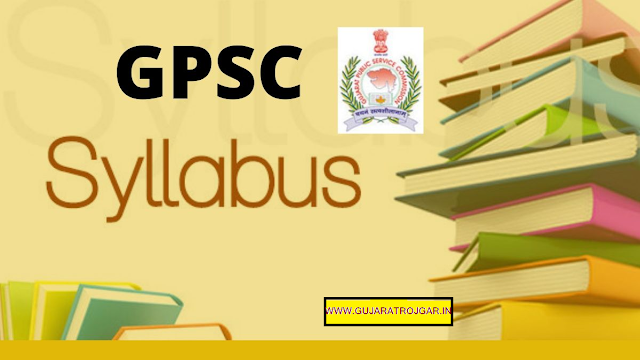 Gujarat PSC Class 1 & 2 Syllabus 2019 is provided in detail below. Contenders who are waiting for the prelims exam syllabus can approach here. The subjects and subtopics of the whole GPSC Class 1 Syllabus in Gujarati are also included here. Without wasting time, applicants must start their preparation.

GPSC Civil Services Exam Preparation
EXAM STRUCTURE OF GPSC GUJARAT ADMINISTRATIVE SERVICES
The medium of the examination shall be English and Gujarati. Gujarati and English Papers in Main Exam shall be in respective Language only. In case of question of interpretation of syllabus, the interpretation of the English shall be final.

NOTE: One third marks are deducted for each incorrect response

Any Graduate Can Apply (Arts, Commerce or Science).

The Candidate must have Degree/Graduation in any discipline from recognized University.

A final year student is also eligible for the exam.

3. Foreign invasions on India and their impact.

4. The Mauryan and the Gupta Empire- their administration- social, religious and economic conditions-art, architecture, literature, science and technology.

6. The Delhi Sultanate, Vijaynagar Empire and the Mughal Empire.

7. The Bhakti Movement and Sufism.

10. Gujarat under the Mughals and the Marathas, Gaekwad’s rule in Baroda- Walker’s Settlement.

11. The European Trading companies in India- their struggle for supremacy- with special reference to Bengal, Mysore, Marathas and Hyderabad.

13. Indian war of Independence of 1857 - Origin, nature, causes, consequences and significance with special reference to Gujarat.

14. Religious and social Reform Movements in 19th Century in India and Gujarat.

16. Reform measures by the Princely States of Saurashtra, Kutchh and Gujarat with special reference to Sayajirao Gaekwad III of Baroda, Bhagwatsinhji of Gondal, Waghji-II of Morbi, Bhavsinhji II of Bhavnagar, Lakhajiraj of Rajkot and Ranjitsinh of Nawanagar.

18. The Role of Sardar Patel in freedom movement and post independence consolidation.

19. Dr. B.R. Ambedkar, his life and contribution to making of Indian Constitution.

20. India after Independence - Reorganization of the States within the country, Maha Gujarat Movement, Major events.

2. Indian saint tradition and its impact on psyche of people.

4. Indian Music and its importance.

6. Language and dialects of Gujarat.

10. Pilgrimage and Tourist Places of Gujarat.

2. Functions and Responsibilities of the Union and the States, Parliament and State Legislatures: Structure, Function, Power and Privileges. Issues and challenges pertaining to Federal Structure: Devolution of Power and Finances up to local levels and Challenges therein.

6. Impact of Liberalization, Privatization and Globalization on Governance.

10. Important Policies and Programmes of Central and State Governments

4. Shapes and their Sub-sections, Venn Diagram.

5. Problems based on Clocks, Calendar and Age.

6. Number system and order of Magnitude.

7. Linear Equations - in one or two Variables.

14. Lines, angels and common geometrical figures – properties of transverse of parallel lines, properties of related to measure of sides of a triangles, Pythagoras theorem, quadrilateral, rectangle, parallelogram, and rhombus.

(A) Indian Economy and Planning

Attempt three essay, one from each of the three sections, in about 800 words each.

This paper is designed to test candidate’s (i) knowledge / awareness of a variety of Subjects and (ii) their ability to compose a sustained piece of writing in the form of an essay.

This paper would test the following:

1. Ability to compose a well-argued piece of writing

2. Ability to express coherently and sequentially

3. Awareness of the subject chosen

Credit will be given for the following:

3. Originality of thought and expression

2. The Vedic times, Jainism and Buddhism. The Nanda Dynasty.

3. Foreign invasions on India and their impact.

4. Important Dynasties of Ancient India with special reference to the Mauryas, the Sungas, The Satvahanas,The Kushanas, The Guptas, The Chalukyas, The Rashtrakuts, Vijaynagar Empire, Pallavas and Cholas- their administration, art, architecture, literature, science and technology.

6. Historical accounts of the Foreign Travelers.

7. Harshvardhana and his times. His relations with Gujarat.

8. The Rajput period, the Solankis of Gujarat, Invasions of Gazani and Ghori.

10. The Bhakti Movement and Sufism.

12. The rise and fall of the Maratha Empire.

13. The advent of the Europeans in India. Establishment and expansion of British rule in India from 1757 to 1856. Land Revenue Settlement. Permanent Settlement. Ryotwari and Mahalvari.

14. Indian war of Independence of 1857 and Queen Victoria’s Proclamation.

15. Religious and social reform movements in 19th Century in India and Gujarat.

17. Rise of Mahatma Gandhi on National Horizon, impact of his thoughts, principles and philosophy on political, social, economic, religious and cultural life of India.

18. The Role of Sardar Patel in freedom movement and post-independence consolidation.

20. Dr. B.R. Ambedkar, his life and contribution to making of Indian Constitution.

21. India after Independence - Reorganization of the States within the country, Maha Gujarat Movement, Major events.

1. Indian Culture and its Salient aspects of Art forms, Literature, Architecture and Sculpture from Ancient to Modern times; Salient features of Indian Society, Diversity of India.

3. Socio-Cultural context of the performance of Gujarati “BHAVAI’.

5. Influence of Indian Cinema and Theatre on Society.

6. Gandhian thoughts and its relevance.

(A) Indian Polity and Constitution:

1. Indian Constitution and its salient features.

2. Functions and duties of the Indian Union and the State Governments.

3. Issues and challenges pertaining to the Federal structure – Role of Governor in States.

6. Constitutional Authorities and their Role.

7. Parliament and State Legislatures – structure, functioning, conduct of business, powers & privileges and issues arising out of these.

(B) Public Administration and Governance:

10. Role of Civil Services in Democracy.

11. Government policies and interventions for development in various sectors and issues and problems of implementation.

12. Development processes - the role of civil society, NGOs and other stakeholders.

14. Good governance and e-governance- Transparency, accountability and responsiveness in governance – Citizen’s Charter. RTI, Public Service Act and their implications, Concept of Social Audit and its importance.

15. Ethics and Human Interface: Essence, determinants and consequences of Ethics in human behavior; dimensions of ethics; ethics in private and public relationships, ethics, integrity and accountability in public service – RTI, Public Service Act and its implications.

16. Attitude: content, functions; its influence and relation with thought and behavior; moral and political attitudes; role of social influence and persuasion.

17. Emotional intelligence - concept, utilities and application in administration and governance.

7. Nature, Scope and Applications of Biotechnology and Nanotechnology in India; Ethical, Social and Legal concerns, Government policies; Genetic engineering, issues related to it and its impact on human life.

8. Achievements of Indians in the field of Science and Technology- Indigenous technologies and developing new technologies.

9. Issues related to Intellectual Property Rights in the field of Science and Technology.

(B) Indian Economy and Planning

3. Land reforms in India and Gujarat.

6. Policies and Performance of Industry: Structure and composition of Industry– issues of concentration, large vs small industry– industrial location; Trends and patterns of industrial growth, Cottage industries; performance of public sector and privatization.