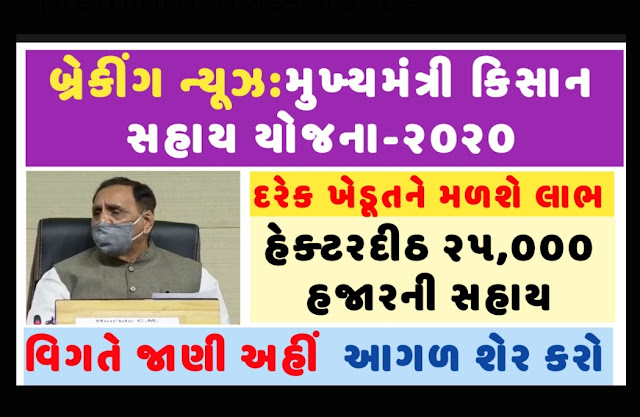 The Gujarat government on Monday launched a new scheme under which farmers facing crop losses due to drought, excess rain or unseasonal rain will get compensation without collection of any premium from them.
The new scheme - Mukhya Mantri Kisan Sahay Yojana - will replace the Pradhan Mantri Fasal Bima Yojana (PMFBY) for this year only, Gujarat Chief Minister Vijay Rupani announced.

Unlike the Centre's crop insurance scheme, farmers are not required to pay any premium under this new state government's scheme to get protection against natural risks like drought, excess or unseasonal rain this kharif season, Mr Rupani told reporters.


"Only for this year, we are replacing PMFBY with the Mukhya Mantri Kisan Sahay Yojana because insurance firms have sought very high premium from us this time. If we approve their tender, the state government will have to pay Rs 4,500 crore towards its share," Mr Rupani said.

The amount sought by insurance firms this year is much higher than the average yearly premium of around Rs 1,800 crore, he said.


"Thus, we have decided not to accept the tender for this year and launch this scheme. Neither the state nor farmers will have to pay any premium this year. Unlike PMFBY, which protects only those farmers who pay premium, our scheme will cover all the farmers, that too with zero premium," the chief minister said.

He said farmers who have sown crops in this kharif (monsoon) season will get benefit under this scheme.
The compensation will be given only if the loss of crop is more than 33 per cent either due to drought, or excess rain, or due to unseasonal rainfall, Mr Rupani said.

A farmer is eligible to get compensation for maximum four hectares of land, he said.

Mr Rupani clarified that apart from the compensation paid under this scheme, farmers are also eligible to get additional compensation under the State Disaster Response Fund in case of crop loss due to natural calamities.

"This new scheme will benefit all the 56 lakh farmers of the state. It is also simpler than PMFBY. We will be launching a dedicated portal so that farmers can apply online. Tribal farmers registered under the Forest Rights Act are also eligible for this scheme," the chief minister said.

Since the state government had already kept aside Rs 1,800 crore to pay the crop insurance premium, the same fund will now be utilised for this scheme, he said.